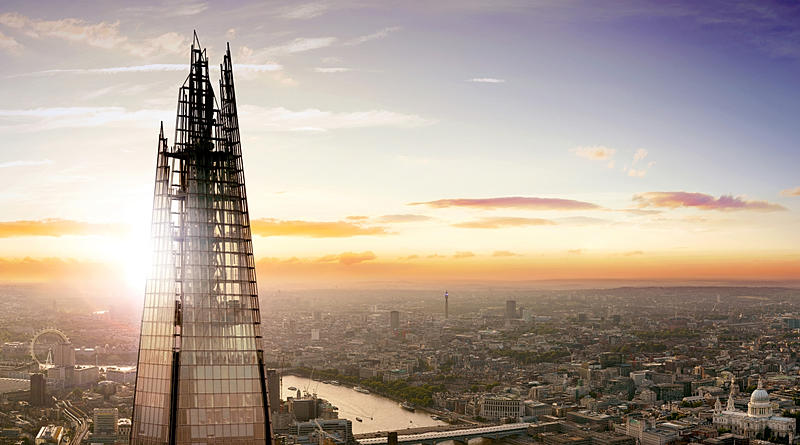 On a murky Saturday in June, my fiancé and I officially started our fitness ‘wedding prep’, daunting enough anyway, without having to do yoga at 1000 feet – at the top of The Shard!  I have dabbled in yoga in the past, but was always a little intimidated in class by my lack of flexibility, and my impatience with, as well as un-relatable hippie teachers.  My fiancé booked it as a little treat to kick start our fitness plan in the run up to the wedding (10 months to go at this point), but I can’t say I was initially looking forward to it.  However, seeing how excited he was about it (naive – since he had never done yoga before!) was motivating, for the yoga and the wedding!  It was a nice sentiment; something we could do together as a time out from all the wedding stuff.

So we dragged ourselves out of bed at 7 am and got the Jubilee line to London Bridge.  The class didn’t start until 8.30, but it warned to be there 15 mins before, and noted there would be plenty of time before and afterwards to take photos – so we wanted to arrive in plenty time.  As we had also paid £40 each for the pleasure, we wanted to make sure we got our money’s worth!

Dubbed as, ‘The highest yoga classes in the world, at over 1000 feet high.  Join Leo and Mandy weekly with your mat laid out overlooking the most stunning panoramic views where you can see London’s landmarks and also up to 40 miles away!’

-And it didn’t disappoint!  It was actually quite refreshing to be up so early in the morning, make-up free, in no rush whatsoever.  We were on the platform level used for the viewing deck at level 69 (which usually costs min £26 anyway), so the panorama when we got up there sure woke us up!  It wasn’t a particularly nice June morning, but the view was still bright – despite the grey clouds.  All the mats were pre laid for the class arriving, so it was easy enough to slump into a relaxing gaze as soon as we got there.

The class was friendly and relaxed, with Mandy at one of the corners of The Shard echoing soothing instructions from a discreet microphone.  -It was just by chance we managed to get a good spot right in front of her; if you were at the opposite corner, you just had to listen intently for instructions – rather than seeing each demonstration fully realized.  To say my fiancé was a novice would be an understatement, and frankly I needed all the help I could get!  -So it worked out well for us!  And as we were together, we didn’t mind being so far at the front of the class either!  That said, it was strangely intimate, as the open space was in a square around the middle lift shafts of The Shard, so everyone had their own side, their own little façade of The Shard, and their own view. 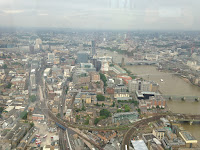 The class is obviously advertised as a bit of a novelty, so there was a real mixture of beginners and regulars.  I was surprised to see the woman right beside me standing on her head half way through – when at the beginning of the class she told the teacher she was 5 months pregnant!  That put me to shame, but the instructors made it comfortable and made the environment very relaxed – everyone was very much encouraged to go with the flow.  The class seemed to fly by, some parts hard, some very hard, but we spent an equal amount of time on each part of our body, so I never felt strained or uncomfortable in any position for too long – quite the opposite.  We left feeling super chilled and on top of the world – quite literally.  It was somewhat satisfying to be physically so high above London on a busy summer Saturday morning; watching everyone bustle below, the trains coming in and out of Waterloo, while we were quietly chilling in our own world.  When the class was over we floated around both of the viewing platforms (which don’t open until 10am, so we had it to ourselves) to take some shameless Instagram photos.

An added bonus was the gorgeous goodie bag at the end, which must have been worth a tenner in samples anyway – REN face cream, Vita Coco coconut water, a Shard oyster card holder, a gift voucher for the Yogasphere retreats abroad… the list goes on.  It was a neat little treat to finish off the experience.

I would highly recommended for couples therapy, sisterly love, small hen dos, or just a time-out from your wedding planning!  A good excuse to get up early and come into town at the weekend; rewarded with brunch afterwards via a leisurely stroll through Borough Market or down Bermondsey St (head to The Garrison Public House for some eggs and then Fuckoffee for a mean coffee to take back on the tube).

Plan your visit in winter time, around late sunrises to coincide with the class start time for maximum impact – I’m booking now for January as pre wedding chill out!

No membership fee required, and for every class every person attends, Yogasphere will plant 10 trees, win win! 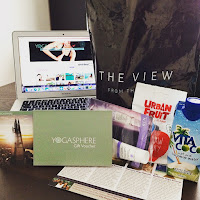 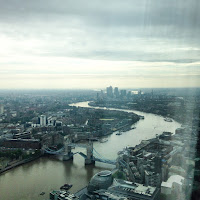 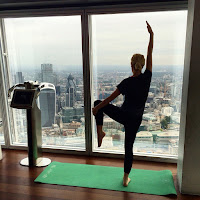