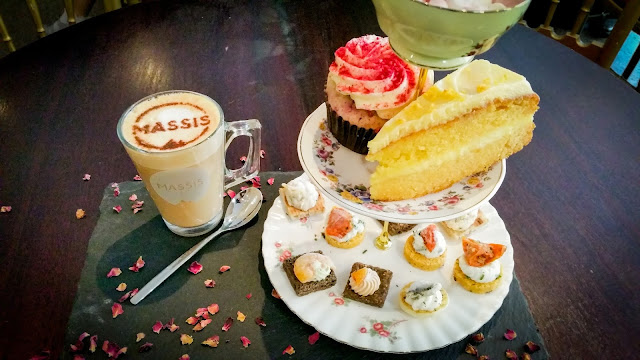 I recently stumbled across the Arts Theatre in Soho and thought it would be a great hen weekend idea.  I’d never even heard of it before so was surprised to find it tucked away in the heart of the west end, just a stone’s throw away from Leicester Square tube.

My in laws were visiting this weekend and, as they come down to London for a visit quite regularly, I’m always on the lookout for new things to do with them, or restaurant deals that make it easy to dine out the whole weekend.  As I was browsing bookatable.co.uk’s star deals, I stumbled upon an ‘Ace of Spades’ afternoon tea deal, for £14 pp.  It didn’t give much away, but the picture looked nice and it seemed a steal at only £14, compared to the other afternoon tea deals in central that usually range anywhere from £20 to £60.  As we weren’t looking for anything fancy, I thought it would be a nice antidote to the December craziness of central London.

We arrived harassed after bus troubles due to weekend engineering works on the tubes, nearly missing the tiny doorway to the Arts Theatre, but it was surprisingly calm inside.  The afternoon tea was in the lobby of the Arts Theatre at The MADD Hatter’s Café.  The Arts Theatre’s website describes the café as:

“A collaborative creation by two brands – MADD, specialist in all things desserts and MASSIS tea, responsible for redefining the nation’s favourite drink – provides a haven for tea, lounge and dessert lovers alike.” 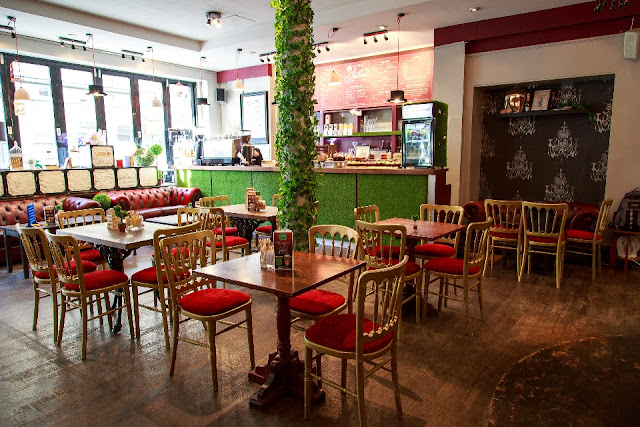 Very small but perfectly formed, it was very much a café and a little pokey, so I wasn’t sure what was to come with the afternoon tea – if the deal had perhaps exaggerated ‘tea and a cupcake’ by calling it afternoon tea.  However, I was very pleasantly surprised.  The waitress (who was lovely by the way, so polite and warm and very much a theatre type) advised for the deal that we could choose a hot drink and a cake, and they ‘would do the rest’.

Their boards were filled with lots of different hot drinks which were both imaginative and intriguing; their lattes included a ‘Gingerbread Hug’ and ‘Carnival Candy Floss’, and their loose leaf tea included ‘Superior Jasmine Dragon Pearls’ and ‘Mango Sencha’ white and green tea.  Having been somewhat overwhelmed on the bus-tube-tube-dash on the way over, I panicked and just ordered my regular peppermint tea.  The peppermint tea turned out to be amazing, fresh loose leaf and delivered in and amazing 2 in 1 brewing-pot-come-mug, but I wish I had gone for something much more exotic given there was so much choice!  Their cakes were equally impressive, ranging from Oreo slices to full blown Orange Polenta cream cake.  Then what was to come was a 3 tiered cake stand of sweet and savouries goodies, including a tea cup full of Maltesers!  There were four of us, so we had two full cake stands between us – and we couldn’t even finish them!  I was secretly hoping for more of a mad hatter’s theme (there wasn’t really any apart from the café itself), but for the price I was more than content with the selection of cakes and cute canapes that came. 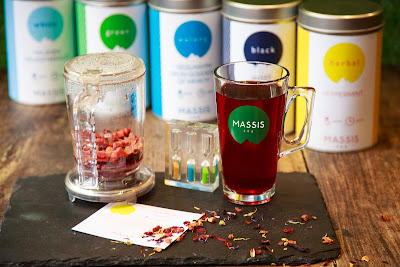 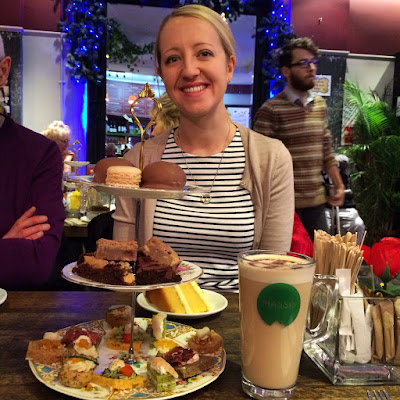 It was only as we were sitting back, full to bursting, when the café began to fill up a bit, that I remembered it was also a theatre too!  It was nearing 4 o’clock and outside was getting a little darker in the midst of December, and out came an equally intriguing cocktail menu for the theatre goers that had newly arrived.  I checked out the programme and, unlike a lot of the other west end theatres, they have (different) performances starting at 1pm, 4pm, 4.30pm, 7.30pm and 8pm.  This particular weekend it was The Nutcracker, The Blues Brothers Christmas Special, and a Christmas Carol respectively.  I thought this sounded ideal for hen weekend planning – I’ve always found normal theatre performance times (e.g. 7pm-ish) a bit of a rush (or delay) for dinner, and equally matinées have never appealed to me (too early).  We left relaxed and thoroughly full and satisfied, wishing we had topped it off with A Christmas Carol at 4.30pm.

Perfect for something off the beaten track, if you want a modern casual alternative to the classic British afternoon tea.  Not suitable for a bride who is more champagne than chai latte – suss her out first to make sure she’s not expecting The Ritz or The Dorchester – it’s a world away from the Mad Hatters Afternoon Tea Party at the Sanderson on my London Hen Party Hot List post. 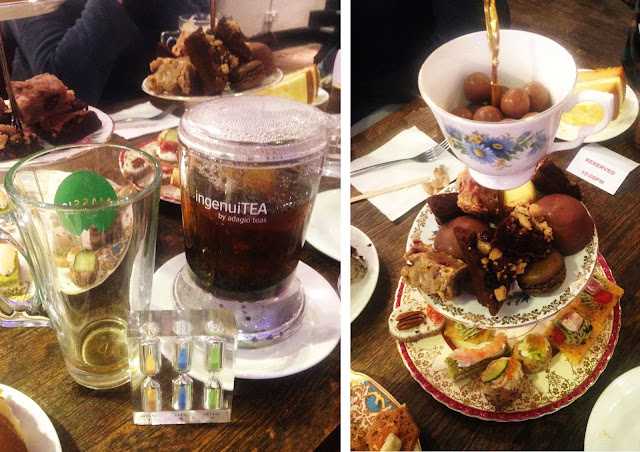 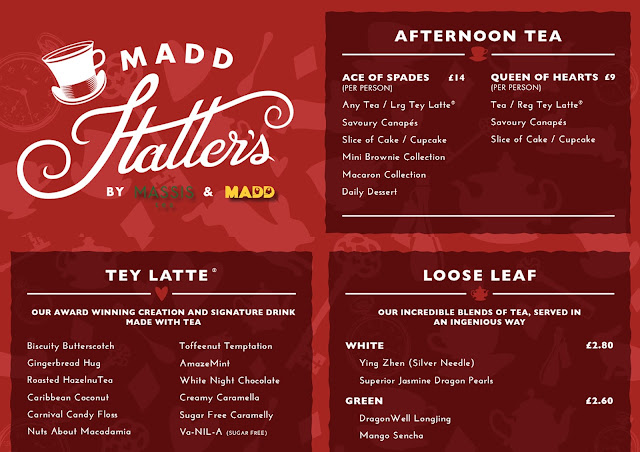