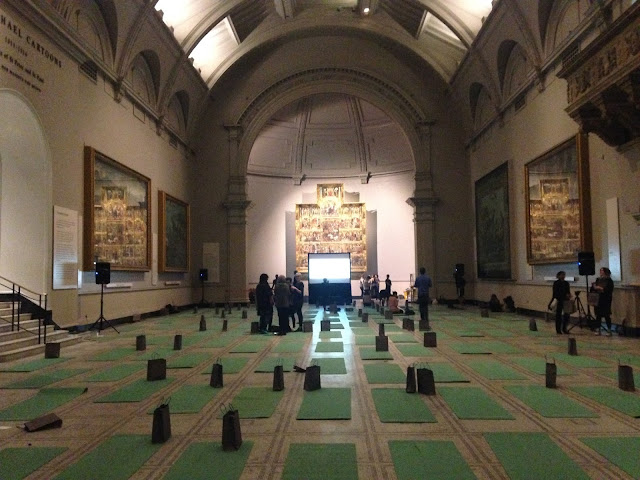 Since I kick-started my wedding fitness yoga plan with Yoga at The Shard back in July, my fiancé and I have been dutifully going every week to Yogasphere’s City sessions on Saturday mornings at a luxed up gym near Bank tube.  The teacher is great and the gym that hosts Saturdays offers complimentary luxury toiletries, hair dryers and GHDs – so I was sold.  There are other classes we could go to with our membership, but I’ve never been that good at committing to weekday classes, and to be honest the Saturday morning classes have stopped me going out so much on Fridays…  which has been great for wedding budgeting as well as fitness!

One thing about Yogasphere compared to other clubs I’ve tried, is that they offer free events as part of your membership.  I had never actually tried one before, so when I got an email about free yoga at the V&A as part of the Fabric of India exhibition it seemed like an easy option – I love the V&A.

So last Friday night, I dragged my sister out to South Ken after work on a horrible November evening for some yoga!  (This was definitely more of a sister outing since it was at the V&A, and it was a great excuse to get spend some more time with my maid of honour.)  I can’t say I was super excited about it though, having sat on the tube for 35 mins cold and wet in leggings, however when we got there, the V&A was buzzing with lots of people taking advantage of their Friday lates nights.  On trend with all the other major London museums, the V&A opens later on Fridays (until 10pm) for those wishing for some culture but who have no desire to spend their Saturdays or Sundays with children.  A bar, a DJ and some well manipulated lighting (all themed around India for the exhibition) really transformed the entrance hall and I was instantly uplifted with the Friday night vibes. 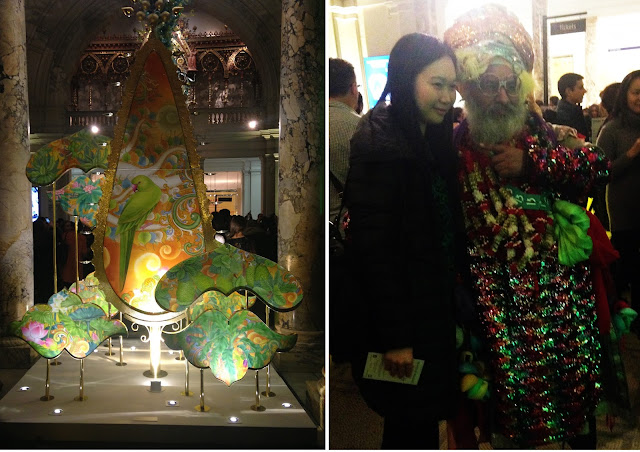 Making our way through the bar, we skulked around trying to find the Raphael Rooms where the yoga was to take place.  We were greeted with a sea of yoga mats and a tranquil energy from the amazing masterpieces encompassing the room. 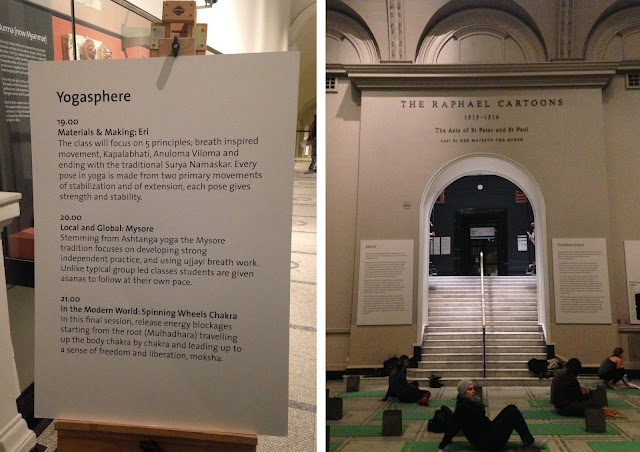 The night was split into 3 sessions, each with their own theme around The Fabric of India exhibition.  We went for the 8pm class:

Made from 4 separate sections; the delicate chintz fabric detailing adds to the regal splendour of the portable palace, belonging to the illustrious ruler of Mysore. Stemming from Ashtanga yoga the Mysore tradition develops a strong personal practice using ujjayi breath to guide and follow the asanas at breaths pace.

Like the mordant bond the dye to the textile using alkaline and acid solutions, we will have poses that include binding, twists and long holds too. Many of the benefits of yoga include balancing the alkaline and acid levels of the body and according to Patanjalis’ 8 limbs of yoga – yoga is a form of self-purification.  Turning the focus inwards to guide yourself through a personal practice.”

I was intrigued by the class description and the wellbeing focus, especially for a Friday night, and the timing suited us better than 7 or 9pm…

The teacher hosting was one half of the Yogasphere owners, Leo Lourdes; he made everyone feel very welcome, he was relaxed yet candid.  We sat in the middle, about 4 rows from the front, but in such a vast space it was quite hard to hear what was going on let alone keep up – the sound system was a little muffled and quite echo-ey.  It also meant I totally missed his intro pep talk at the beginning about the history of yoga and its connection to ancient India – which I was actually quite interested about!  Despite the intriguing title of the class, it didn’t strike me as too much different or too heavily characterised, compared to my normal Saturday yoga class.  However, the class was very well organised and they had the whole Yogasphere team there doing the moves from the side lines so it was easier to follow, and now again a few of them would circle the room and gently persuade better movement or more of a stretch individually.  –It was also nice, and reassuring, to see my normal Saturday teacher there.

The class was scheduled for 30 mins, but by the time we left with our complimentary coconut water goody bag it was around 8.45pm, so it wasn’t rushed and I felt quite genuinely relaxed.  It was quite humbling and an amazing experience to zone out in such an amazing space.  Also I have to say, the rest of my weekend was pretty calm and positively peaceful, despite further wedding planning, and I can’t help thinking it was because I started it with yoga at the V&A on the Friday night. 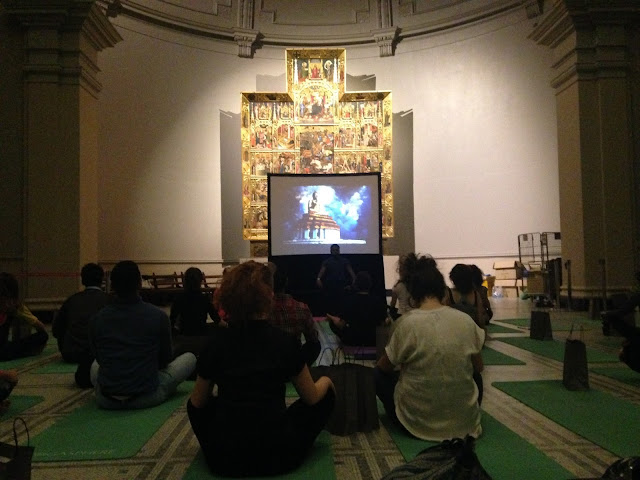 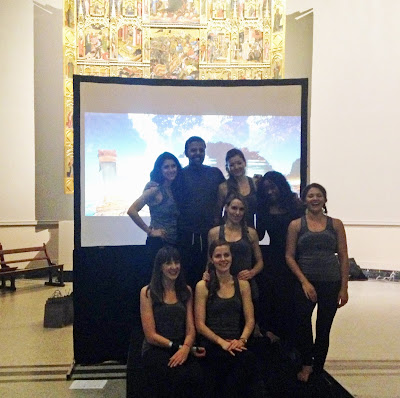