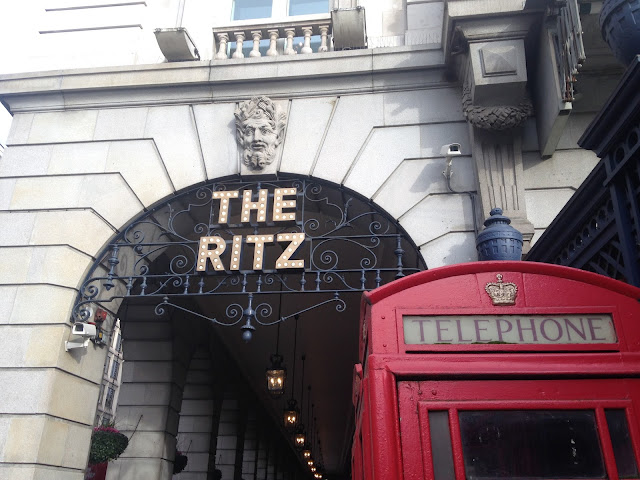 I have had a bit of a break from blogging so I could focus a little more on my wedding.  Now I’m definitely on the countdown, I’ve been strategically planning my evenings around healthy cooking/eating, invitations and table plans, chasing suppliers, and going to the gym – in that order.  To give ourselves a little bit of a treat and some motivation, I booked The Ritz for a special lunch to celebrate our engagement anniversary last Saturday – which also just so happened to be exactly 3 months until our wedding.

We got engaged in Paris last January, and to me at the time, it seemed nothing less than perfect, so I wanted to treat my fiancé to something similarly as worthy as Le Jules Verne restaurant at the Eiffel Tower in Paris.  I had trouble booking a lunch on The Ritz website, so I popped in when I was walking home one evening.  The side entrance to the restaurant was grand yet unassuming, although I felt a little intimidated making the booking in person. 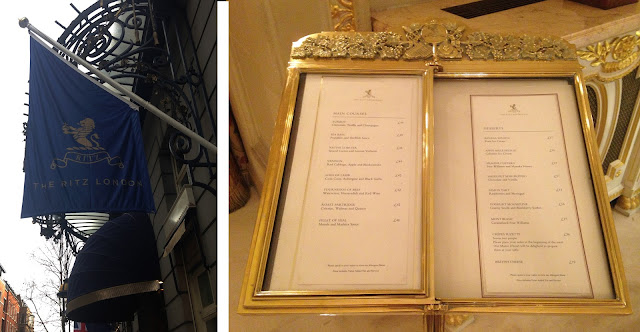 So on Saturday we had a lazy morning after some gym time and took the tube to Green Park for lunch.  The entrance way was caked in gold art nouveau details, and dozens and dozens of white roses filled the hallway.  Pianos played softly in the background from every angle, and we were warmly welcomed by at least 5 members of staff before we even made it to the restaurant entrance.  So far, so romantic. 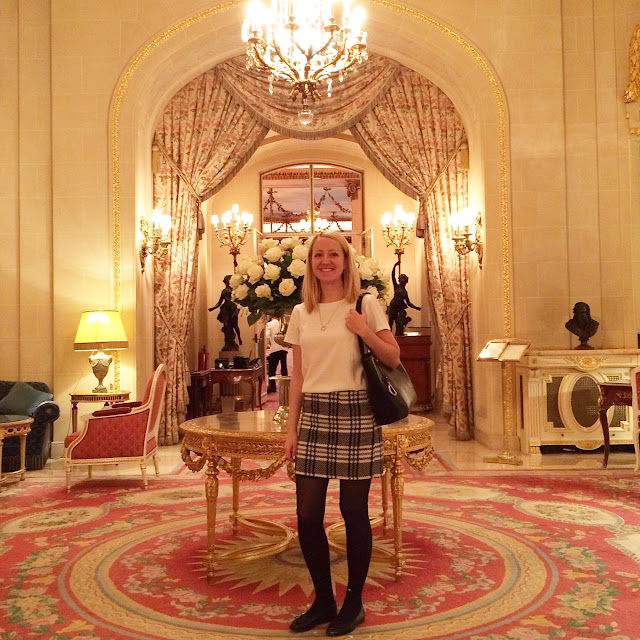 We were nicely turned out, but not quite as nice as we were a year ago for Le Jules Verne when we got engaged…  To our horror and complete surprise, the lady on reception politely told us that a tie, blazer and shoes were required by gents to enter the restaurant!  (My fiancé was wearing a smart shirt and jumper combo, his usual off duty look, with soft black leather Lacoste shoes – not brogues by any means, but certainly at the shoe end of the casual spectrum!)  The lady however quickly followed this up, saying they kept a cloakroom of such garments ready for such occasions!  I was mortified and relieved in equal measure.  She wasn’t patronising in the slightest (she gave us the impression this happened a lot!), but we were still quite embarrassed, of course.  My fiancé got ushered away to the cloakroom, while I waited patiently, daring not to check my phone.  He was holding this against me because I booked it – but in my defence, it was a lunch reservation, and The Ritz never confirmed the booking to me!  -How rude not to reconfirm the booking with me the day before!  Likewise, we’ve been in similarly posh restaurants from New York to Geneva (that were much more expensive, might I add), and none were as pretentious as The Ritz.  My fiancé was hating it, and to make matters worse they didn’t have anything that fitted him properly – when we eventually sat down he told me ‘The Ritz incident’ was going into his groom’s speech! 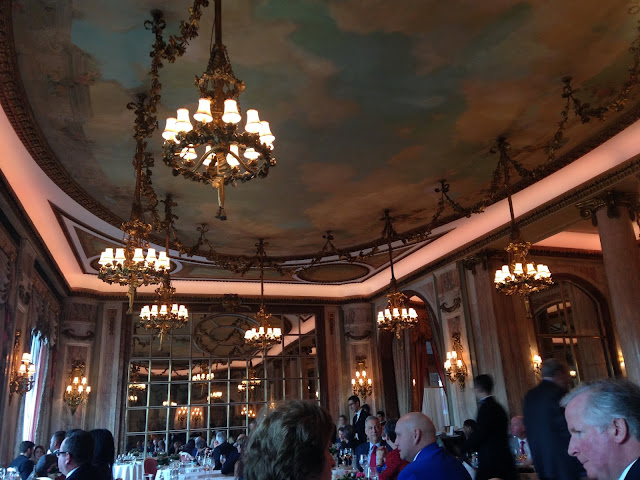 Moving on from said incident, we sat down (with my fiancé shuffling in oversized shoes) to a lovely quiet table for two, away from the ‘family tables’ on the other side of the room.  The room was impressive and looked like something straight out of a painting.  We were in awe of the décor, it was as luxurious as you would expect, but yet not as tasteful as you would assume.  The staff were very friendly I have to say, but the restaurant still had an air of stuffiness around it that I didn’t notice at Le Jules Verne.  We felt more secluded there, whereas the restaurant room at The Ritz is a massive square open plan dining room, so we felt a little exposed in its vast space after said incident!  We were carefully watching for phones and rogue photos being taken to gauge if we could get away with it, and were delighted when the lady in front of us started taking snaps of her food! 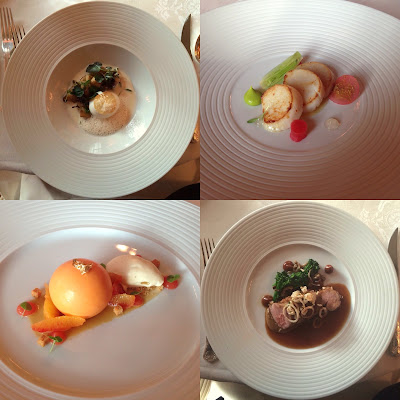 We ordered the set menu, 3 courses for £49; it was the easiest thing on the menu to be honest, and seemed like quite good value for a lunch, since the starters were around £20 alone.  For starters I had roast scallops with bergamot, fennel and radish, and my fiancé had a mushroom veloute with duck egg.  The scallops were cooked to absolute perfection, and the veloute looked impressively put together and was hand poured over the duck egg at the table.  We didn’t hesitate to get our phones out seeing everyone else do the same – one table beside us even had their phones sitting right out on the tablecloth!  By the time the mains came we had begun to relax a little bit, I had quite an ordinary Norfolk black leg chicken with walnut, quince and pumpkin, and my fiancé had a pork ensemble with some bright veg.  Both were delicious with amazing complimentary flavours, but the chicken was a little dry unfortunately – I could have happily eaten 2 plates of the side veg instead of having the chicken.  After that, I wondered if we would manage dessert but our eyes got the better of us, seeing everyone else’s plates walk past us!  For dessert, I had yogurt mousseline with blood orange and ice cream, and my fiancé had banana soufflé with rum ice cream.  The mousseline was concealed in a perfect delicate chocolate sphere, similar in texture and consistency to a kinder egg, and the gold leaf on top was a cute touch.  The banana soufflé was simple but was completely flawless – the highest soufflé I have ever seen! 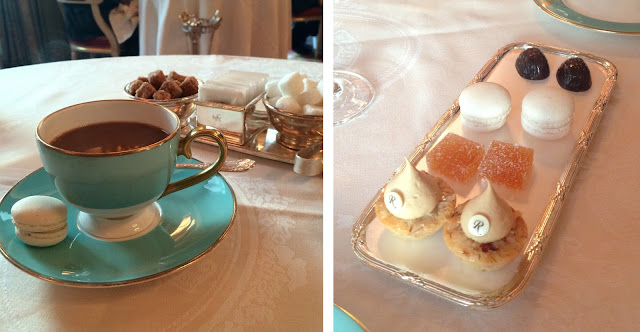 Even though were expecting them, the petit fours that arrived afterwards were a nice surprise, and super cute.  We had a coffee and took everything in, with my fiancé ribbing me for about the twentieth time about being made to wear someone else’s shoes!

It was great to have the experience, but I don’t think we’ll be back… I might not bother to book anything next year! 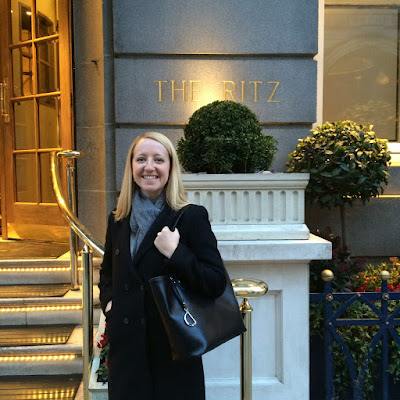