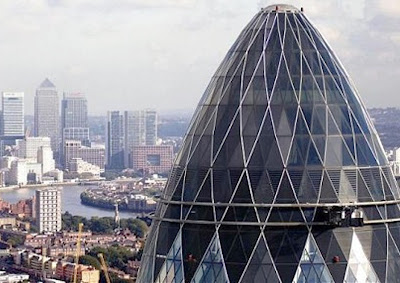 To mark the official countdown until our wedding (one month to go), we celebrated by going for lunch at the top of The Gherkin on Good Friday.  With most weekends of the last year taken up with the usual life vs wedding stuff, I am always keen to book little treats in advance as an extra excuse to spend some quality time together.

I subscribe to bookatable.co.uk, and on a grey Thursday in February a deal for Searcy’s The Gherkin popped into my inbox.  Searcy’s The Gherkin is actually a private members bar and restaurant, but every so often they open reservations to the public for a limited period; the deal was for a set menu to mark their new Spring menu.  I’d actually had my eye on a similar deal at The Gherkin last year, but by the time I’d had the chance to jump on it they were already fully booked for the limited opening!  I didn’t waste any time with this booking, and luckily I managed to get an Easter reservation, but that alone was a challenge trying to squeeze it around both our calendars, wedding planning, and my fiancé’s work trips abroad in the lead up to the wedding.

So, dutifully, after ‘The Ritz incident’ (see post here!) I emailed ahead to check if there was a dress code.  Surely, I thought, nowhere would be as strict as The Ritz, but as this was normally a private members bar I thought I’d better check!  (I was also keen not to give my fiancé any more ammunition for his groom’s speech in a month’s time!)  Luckily, it was basically just ‘city smart-casual’, so we were good to go aside from remembering ID for security.  My fiancé took the opportunity to wear in his new brogues for the wedding (and also a new shirt he bought the week before that was supposed to be for the honeymoon!).

The city was dead on Friday, but it didn’t matter as once we got up to the top (I lost count of the floor number as we had to get 2 separate lifts to the top, but it was upwards of 35) we were literally in the clouds and it felt like another world.  The restaurant was in the very top concave of The Gherkin, at the highest point of the glass dome.  The restaurant was on the penultimate level and the bar on the mezzanine above.

The restaurant was small, taking up only a slithered crescent of the whole floor.  The kitchen was secluded but took up the remaining side of the floor, with the lift shafts and toilets centred at the core of the building.  There was only room for a sprinkling of tables along the window, and then only a handful on the next row; so wherever you were sitting, even if not right up to the window like us, you had a great view. 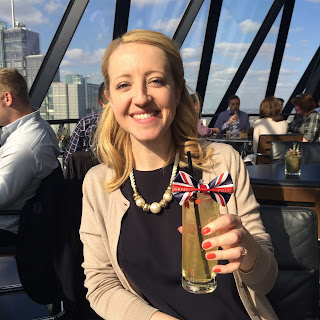 We were greeted with a champagne trolley on arrival (classic upselling for meal deals), however I was keen not to spend any more money than was necessary so kindly reminded them were on the Spring menu deal, which included a cocktail on arrival.  We were then welcomed with a ‘Chase cocktail’, which was delicious but was a super strong vodka and gin fusion which I wasn’t quite ready for, since I was a little hungover from my hair and makeup trial the night before!  The space was immaculate and the waiters were faultless, it could have easily felt quite stuffy but the small space combined with the echoes from the nearby kitchen and the views made it seem a bit more relaxed – perhaps also because we were there for lunch rather than dinner.  The staff also made us feel quite welcome by saying that as soon as a window seat was available they would switch our table for us, however we still had a great view where we were and were happy just to take in the atmosphere.

The menu choices were limited, but we both went for ham hock terrine, followed by chicken and summer veg, and then strawberry and passionfruit cheesecake.  The menu was a similar style to that of The Ritz, but I have to say the chicken was much better here; it was amazingly seasoned and perfectly moist.  The complimentary garnish and flavours with the terrine really made the plate, and the cheesecake was delicately light – I could have easily had two!

By the end of the meal I was getting impatient that we hadn’t been bumped up yet, so we decided to order another drink and take in the views (and get some more photos of course!).  Our waiter then asked if we would like to sit at the window or go up to the mezzanine bar upstairs, which we were unaware of at this point (although we had wondered where everyone kept disappearing to).  We were then led up a seemingly secret spiral staircase to one of the best views of London I have ever seen (and I love a view).

I got an Ultraviolet cocktail, which was a blackberry, lime, mint, violet and prosecco concoction, and my fiancé got a macchiato.  As I had booked towards the end of the lunch service, we nearly had the place to ourselves and had such a nice time together, taking it all in – it felt like the world had stopped for us amongst all the craziness of wedding planning and drinks dos.  I always find a good view quite humbling, to put my own life into perspective again. 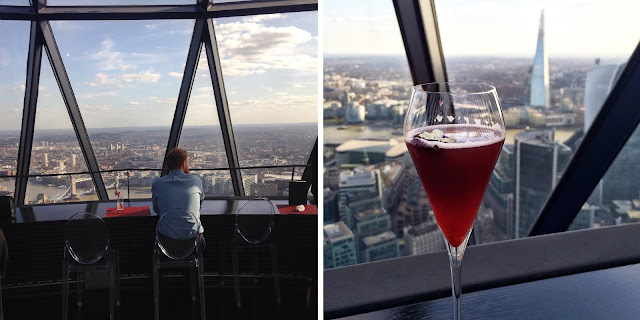 We paid £40 per person for 3 courses and a cocktail, and whilst it was better and cheaper The Ritz, you were really paying for the experience and the views rather than the food.  Absolutely worth a visit though!

It’s also worth noting that the venue offers exclusive hire for weddings, including ceremonies – definitely a truly unique place to say ‘I do’.  Imagine dancing under the stars with a 360 degree view of the twinkling bright lights of London below you on your wedding night? 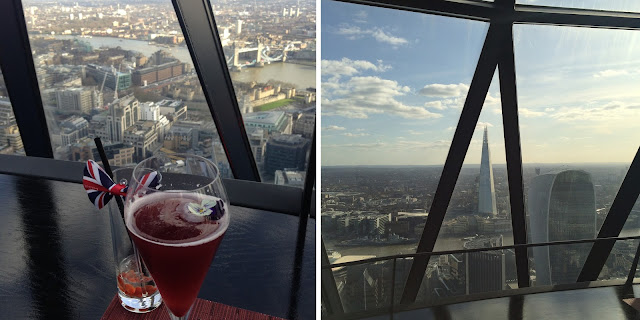 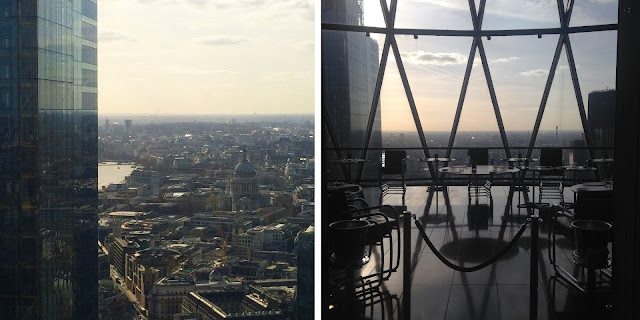 “I honestly don’t think we would have enjoyed our wedding day as much if Laura wasn’t there as we were able to completely forget about all of the organisation involved and just enjoy our day with our friends and family. If you are considering hiring Laura for your wedding day, DO IT!” Sara + Paul, 2019