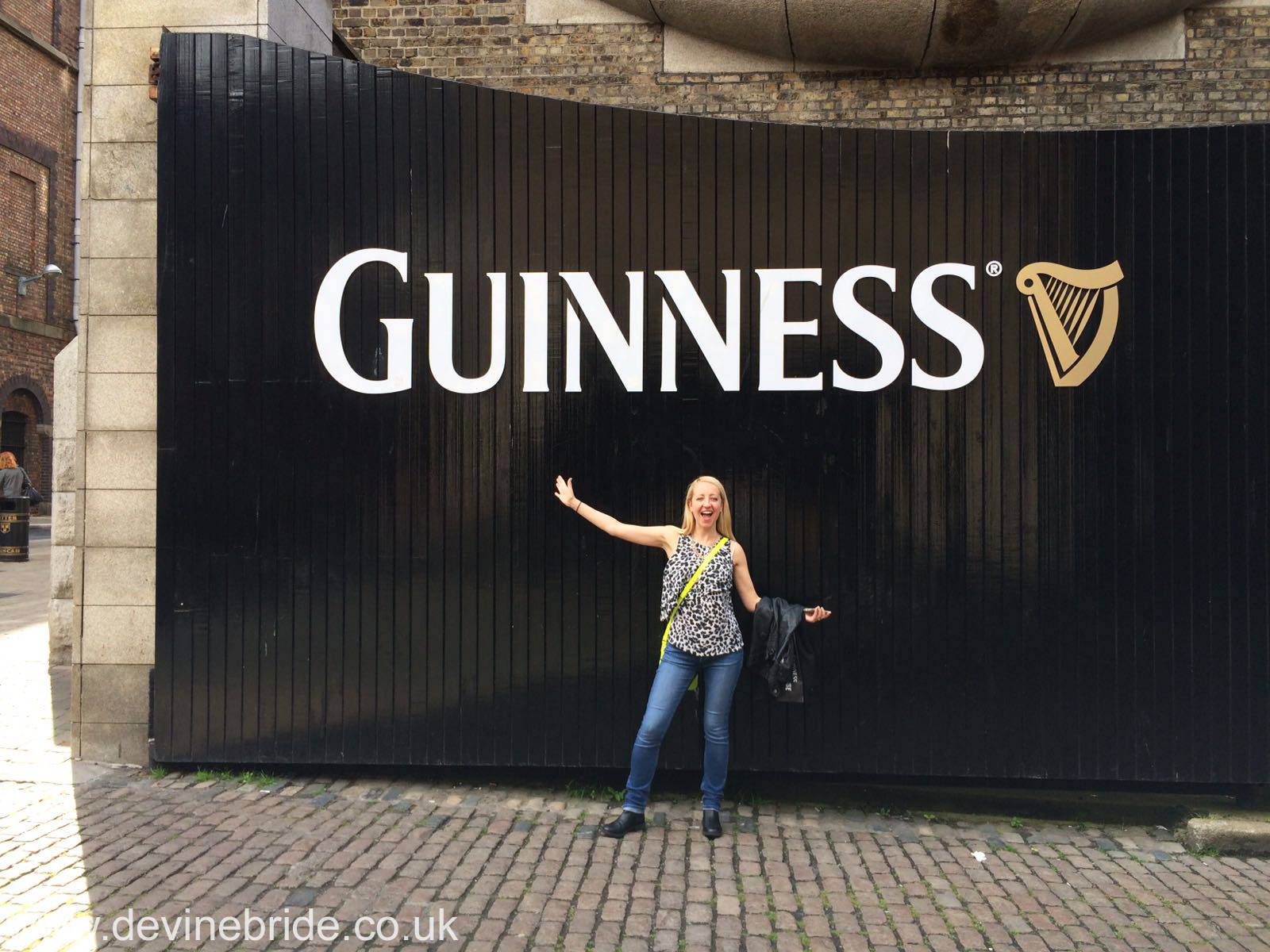 I was in Dublin last weekend for a 30th birthday celebration, so I took the opportunity to do some business research.  This mainly involved checking out fun things to do so it wasn’t very difficult, and went hand in hand with the indulgences of the weekend!

I was last in Dublin 10 years ago, so it was great to discover new things, and relive old things!  So here goes, these are my top things to do in Dublin on a hen weekend, or any weekend, in fact:

This sounds lame and totally cliché, but it is so fun!  For €16, you go through the full Guinness experience, and end up at the rooftop bar with a pint of Guinness in hand (which would cost you €6 anyway).  The museum is built on to the working Guinness factory, where the black stuff has been brewed for over a hundred years, and still is.  The experience takes place inside the world’s largest pint glass…!  It has been designed like a pint of Guinness, and the rooftop Gravity bar (which has the best views in Dublin) is the head of the pint!  The experience is truly unique; aside from learning how Guinness is made and what makes it so special, you are also led through the story of the family behind it all, the Irish heritage, the world of Guinness advertising through the ages (my favourite), and several Guinness bars and cafes serving Irish specialities and sounding out traditional live Irish music. 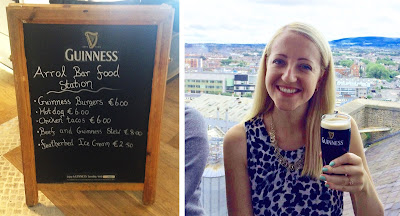 The tour also includes various fun photo opportunities like a gigantic model toucan and tortoise, and a hilarious Guinness photo booth.  It wasn’t like any other museum I’ve ever been to, in that there was a Guinness bar on nearly every floor, meaning you could stop off for a breather and a half pint any time you wanted to – it was all very welcoming and hospitable, very Irish.  We only anticipated being there for an hour or two, but left 4 hours later a little tipsy with a bag full of Guinness chocolate from the gift shop! 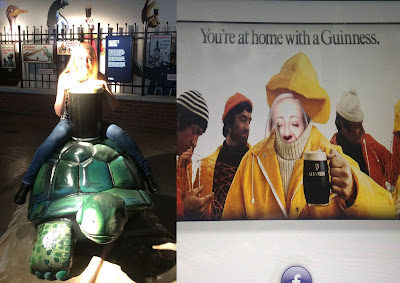 Before we visited, I was under the impression that ‘Temple Bar’ was an actual bar called ‘Temple’.  There is ‘The Temple Bar’, however Temple Bar relates to an area of Dublin!  Similar to the Merchant City in Glasgow or Soho in London, but much smaller.  It’s mainly one street lined with pubs all the way up and down.  These are friendly, homely traditional Irish pubs, every single one with live music (at least one guy with a guitar), and a sing-song at some point!  We stopped off at a couple of pubs around Temple Bar en route home both nights (Friday and Saturday) and it was an amazing atmosphere in every one.  Plus, most of the bars are open until 2.30am Thu-Sat, and we only bumped into one stag do.

3.    Get an Irish Cooked Breakfast

Unbeknown to us, brunch is massive in Dublin!  We hadn’t researched where to go, so we were relieved to find that nearly every café, bar and restaurant offered some kind of breakfast or brunch.  We stumbled across the Queen of Tarts, which served a delicious brunch and even more delicious cakes for afters. 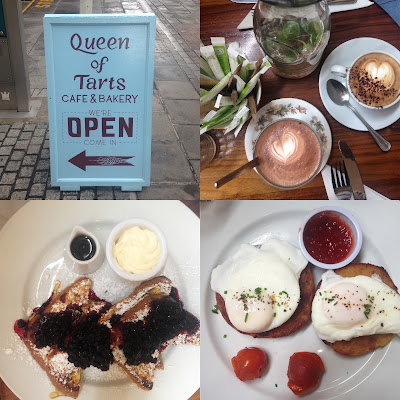 No brunch in Dublin is complete without some Irish sausages and potato cakes to soak up all the Guinness from the night before. 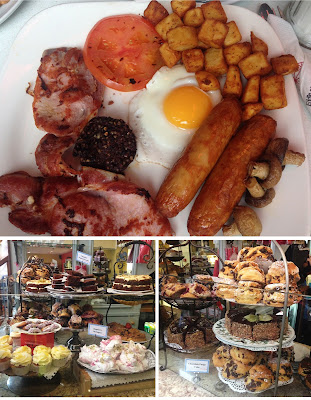 4.    Take a Stroll Along the River to the Ha’Penny Bridge

The Ha’Penny Bridge is a cute cast iron bridge from the 1800s.  The bridge itself is nothing amazing, but it crosses the river Liffey offering lovely unassuming views of the city, and it’s a lovely walk towards the General Post Office (below).  There are also the beginnings of a love lock gathering of initialled padlocks.

For a spot of culture, visit the General Post Office on O’Connell Street.  The building is one of the grandest and most imposing in Dublin, and has historical significance to the city due to the Easter Rising of 1916.  You can still see bullet holes in the building’s façade from this time, and there is a small visitors centre to the side of the building.  It is still a working post office and has a magnificent art deco interior – it would be a wonderful place to get married!  It reminded me of a mini version of Grand Central Station in New York.

If you’re not too tired, try a spot of shopping in Dublin’s wealth of stores.  Ireland used to be famous for brides flying over to nab cheap engagement rings and wedding dresses due to the favourable euro exchange rate, but that trend is now dying a death…!  I know a bride who went over around 5 years ago – flights were so cheap then she booked an extra seat on the way back just for her dress!  That said, you will still find a great range of boutique bridal shops to lust in.  If you’re feeling flush, pop into Brown Thomas (akin to Selfridges in London), or if not, pop into Penneys (Primark in Ireland) to pick up a few bargains – the Dublin store has a much better selection in my opinion, with them being an Irish chain. 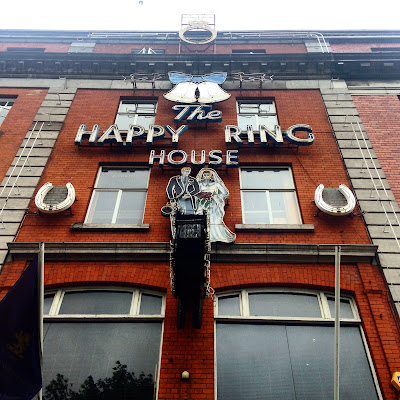 I wasn’t over excited about going to Dublin originally as I had been before, but I fell in love with it all over again and found it such a friendly city, with such a great spirit and atmosphere – and you can’t fail to have a good time when every bar and pub is constantly having a sign song!

We flew from London Gatwick with Ryanair, purely because that was the cheapest option at the time.  However, Dublin is a massive international airport, so you are not limited to Ryanair by any means!  I booked 3 weeks before and paid £150 return, however you can get flights for as little as £30 one way if you are a little more organised and book further in advance.  We paid £330 in total (between 4) for 2 nights in a cute 2-bedroom terraced apartment from Airbnb which was right in the centre of town beside Christ Church Cathedral, 5 mins walk from all of the main areas of Dublin and the river Liffey, but a 10-15 minute walk to the Guinness Storehouse.

Are there any main points or hidden gems in Dublin I’ve missed?  I’d love to hear from you!