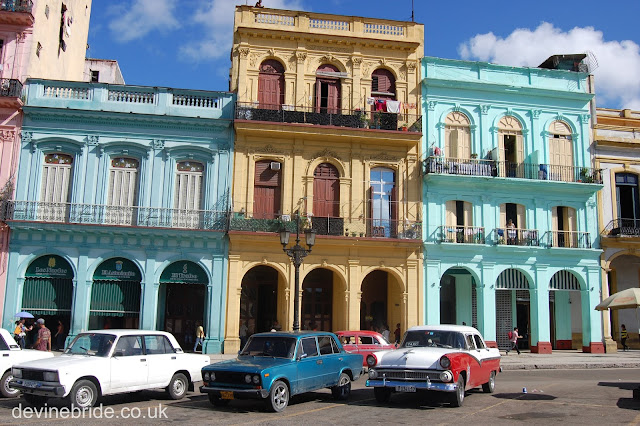 If the thought of going on your honeymoon to Bora Bora bores you, and the idea of the Maldives is monotonous, let me tell you a bit about my trip to Cuba.  Hands down one of the best holidays I’ve ever been on, a very close second to my honeymoon.

Since the late 1950’s, Cuba has lived under a trade embargo from the United States.  The country used to depend heavily on subsidies from the Soviet Union, but since it’s collapse in 1991 Cuba has endured a tough economic period.  All of this has led to what feels like a society frozen in time – old Chevrolet cars roam the streets and you’ll be given a glass of Tukola, rather than Coca-Cola, to have with your Cuba Libre!  This makes Cuba a real change of scenery, and lifestyle, for the Western traveller.  Combine the results of the Cuban Revolution with the country’s love of music, abundance of rum and Caribbean sun, and the result is one of the most colourful cultural experiences that you’re likely to find.

In the aftermath of Fidel Castro’s reign (his brother, Raúl, who assumed presidency in 2006, announced Fidel’s death on Friday), things are changing… a lot.  So visit now!  It’s changed in the three years since we were there, since Obama brokered a deal to restore diplomatic ties with the country two years ago, and it’s likely to become far more westernised now that the original Castro has popped his clogs.

At the time of our trip, it was still massively frowned upon for Americans to visit.  You couldn’t get a direct flight to Cuba from the anywhere in the US.  That didn’t stop a lot of Americans though, as a few we spoke to had travelled via Canada or Mexico to get there.  A lot of effort to get somewhere that is only 90 miles from the Florida coast.

This means there has been zero American influence on the country and its culture for over 50 years.  You don’t even realise quite how many US brands have had an impact on Western culture until you take them away.  No McDonalds, no Coca Cola (or Pepsi), no Apple.  But you would be surprised about all the other day to day things you take for granted, as Cuba has been forced to survive mostly from its own land, produce and technology for over half a century.  The country is stuck in a time warp with re-re-refurbished 1950s American Cadillac’s, run down Spanish colonial architecture, and virtually no wifi.

We wanted to see the real Cuba, so we planned travel around the whole island rather than just heading to the resorts.  This was quite difficult and expensive to do at that time (it has become much easier now), so we booked our flights separately, then accommodation secondary, then we sorted travel between each stop off when we got there – a risk at the time, but we didn’t really have any other options!

Varadero
As it was winter in London when we left for Cuba, we wanted to start with a bit of sun and relaxation, so our first stop was by the beach.  Varadero is quite simply just a resort, there is nothing there apart from a couple of large luxury hotels and golden sands.  It has picture postcard beaches, but you could be anywhere in the Caribbean.  The only option here is go all inclusive, which I’m not normally a fan of, but you’d starve there otherwise.  It worked out ok for us though, and we had a few days of chill on the beach with rum coming out of our ears.  There isn’t the true spirit of Cuba here that we experience in Trinidad or Havana, but it was a pleasant and soft introduction to the country.

Our resort at Varadero: 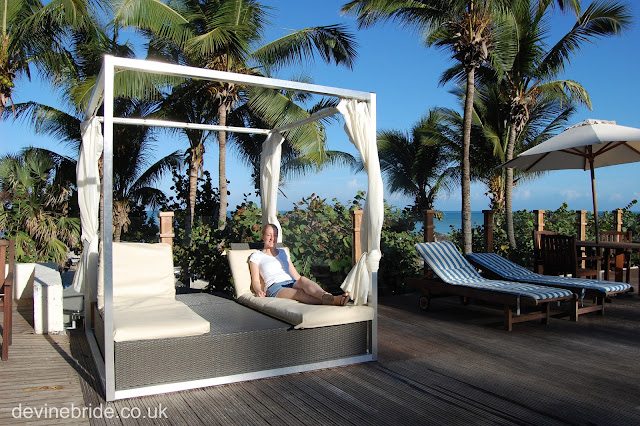 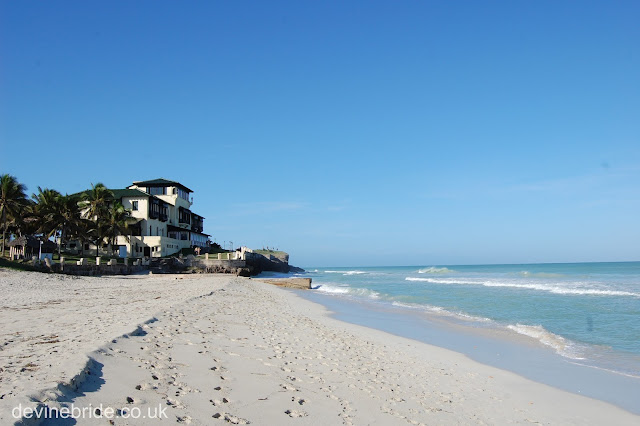 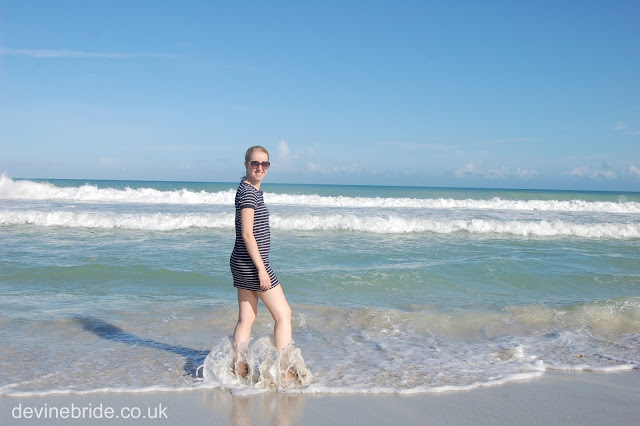 Trinidad
Not to be confused with Trinidad and Tobago on the other side of the Caribbean, Trinidad is a quaint little town on the south facing side of Cuba and has been a UNESCO World Heritage site since 1988.  This is the real Cuba.  The old-style cars we didn’t see in Varadero, the authentic street music, Spanish architecture that was falling to bits, and no commercial hotels.  We stayed in a Casa Particulare (a Cuban guest house), that turned out to be basically just a room in someone’s house.  And it was dreamy, I loved it.

The beautiful town of Trinidad, a UNESCO World Heritage site since 1988: 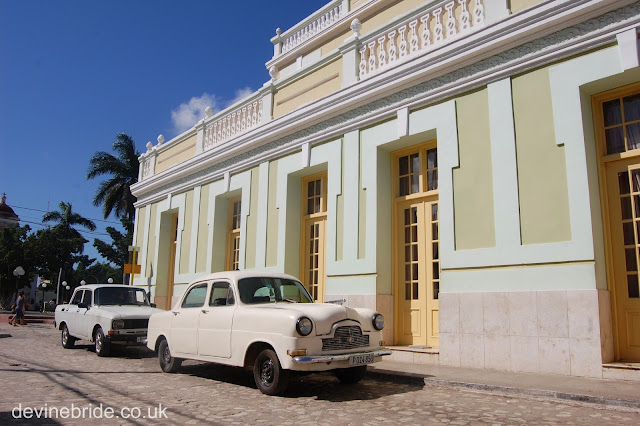 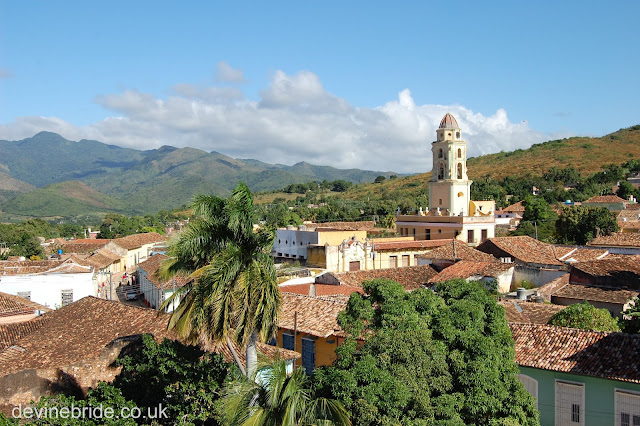 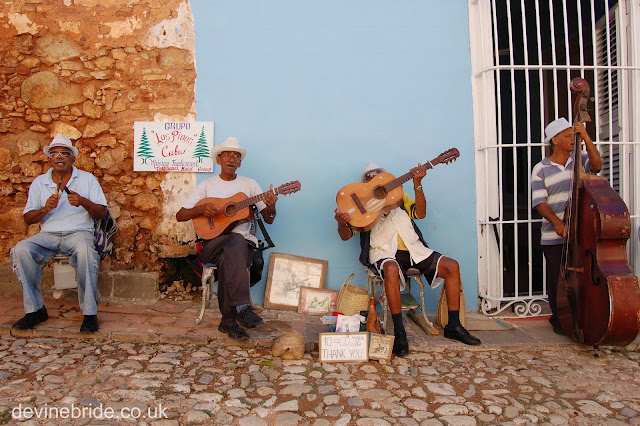 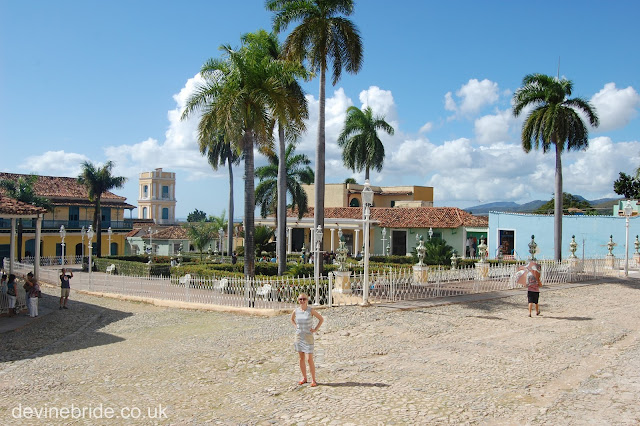 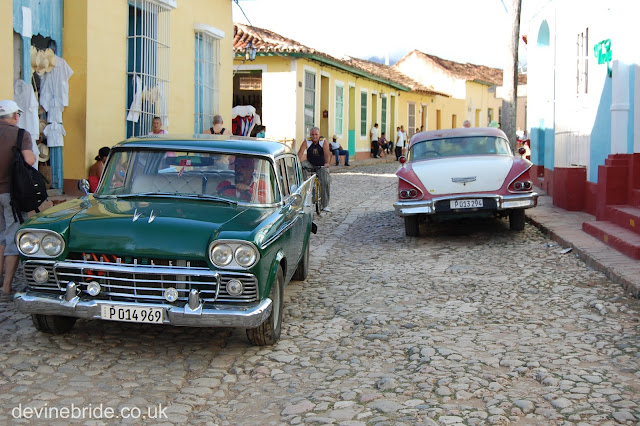 Our guest house in Trinidad: 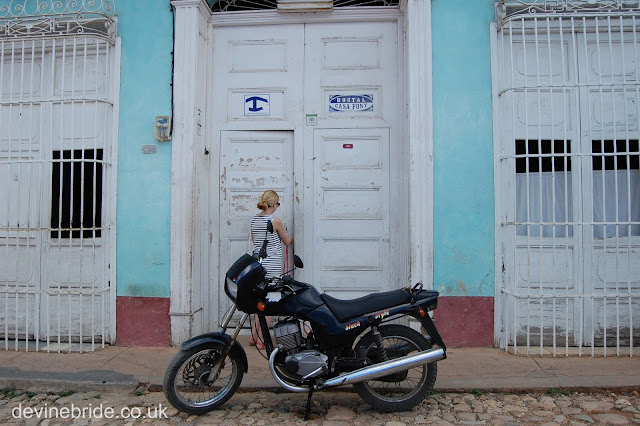 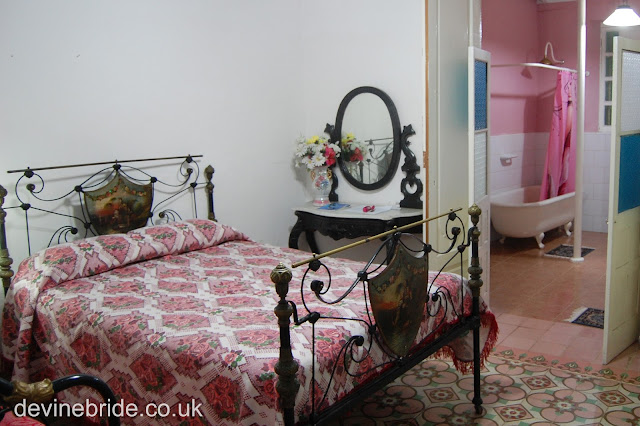 Haggling over 5 pence at the local market in Trinidad: 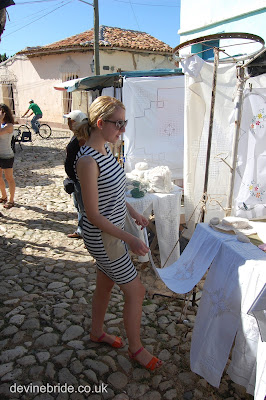 Havana
Now this is the nitty gritty Cuba – and an Ernest Hemingway pilgrimage.  Live music on every corner, rum cocktails in every bar, and cigars on every street.  The city’s bars and restaurants still have the same vintage glamour of the 1950s, so much so it seems like a gimmick, but it’s not.  They’ve just not changed since.  The results of the trade embargo are very apparent here by the evidence of the ruined buildings and so many poor people, but everyone was friendly all the same.  Although a capital city, there was little electricity after dark, most people can’t afford it or the buildings are too old, so it was strange going to rooftop bars in the evening and being greeted with a pitch-black Havana staring back at us!  An evening of live music with the Buena Vista Social Club is not to be missed to complete your authentic experience of Cuba.  We also treated ourselves to one of the nicest hotels in Havana to top off our trip… so we could get some intermittent wifi! 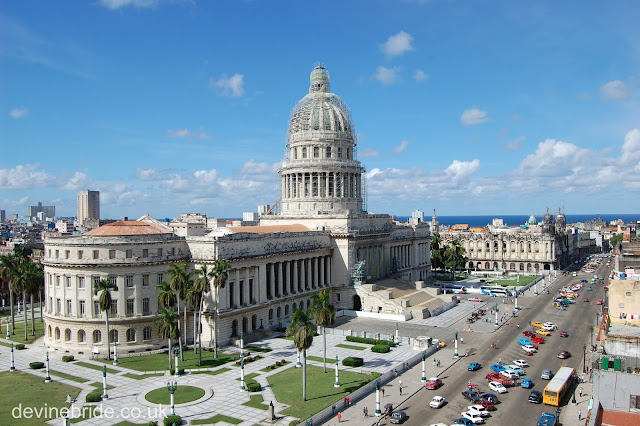 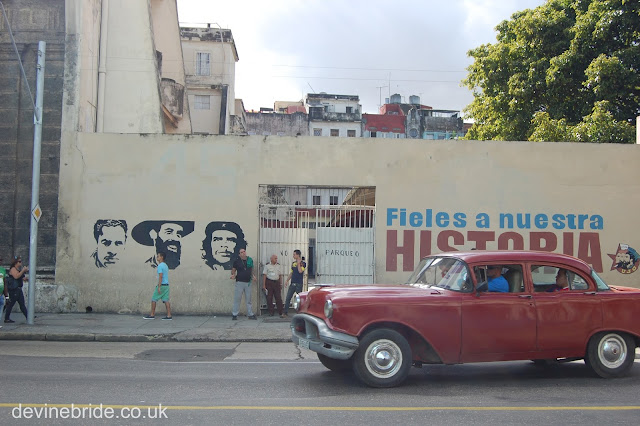 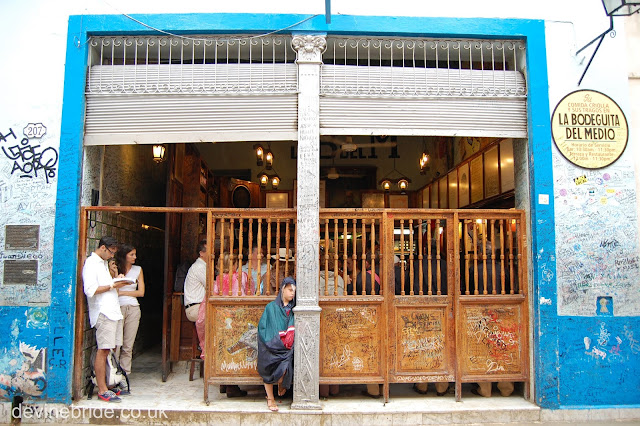 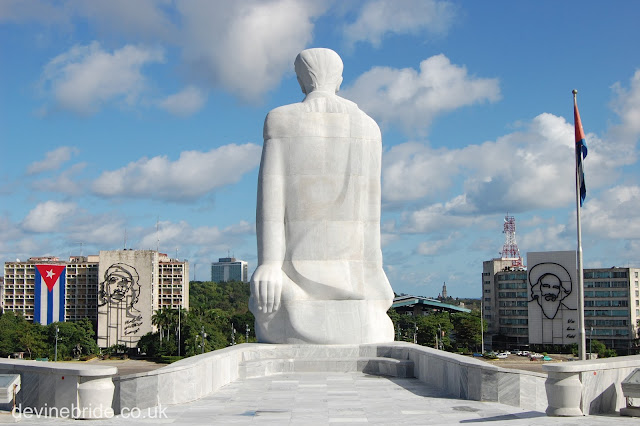 The start of the Hemingway pilgrimage: 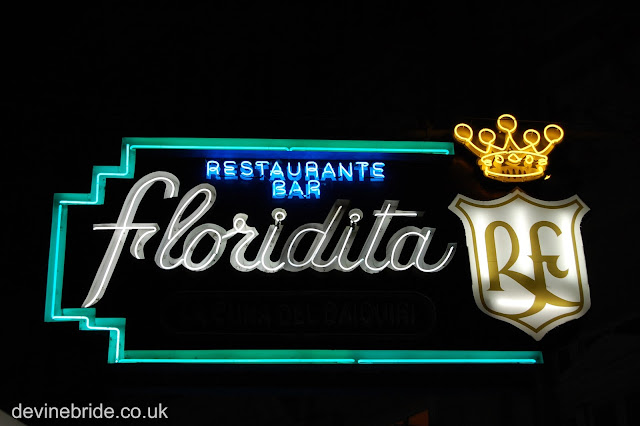 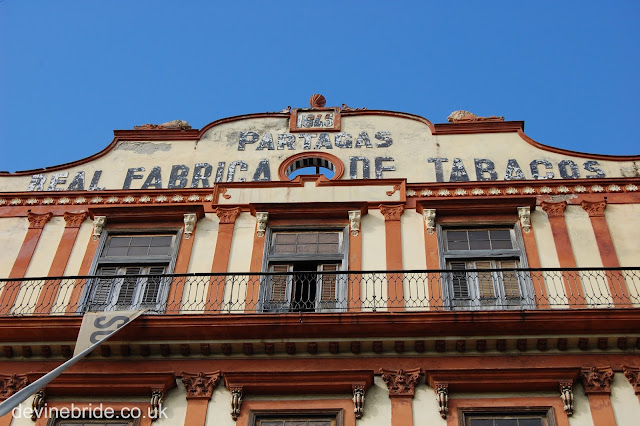 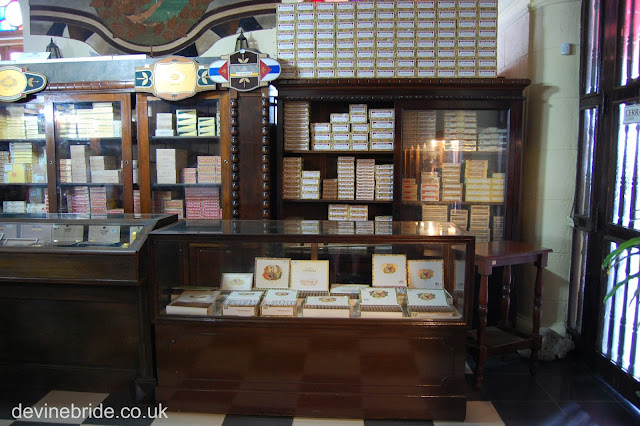 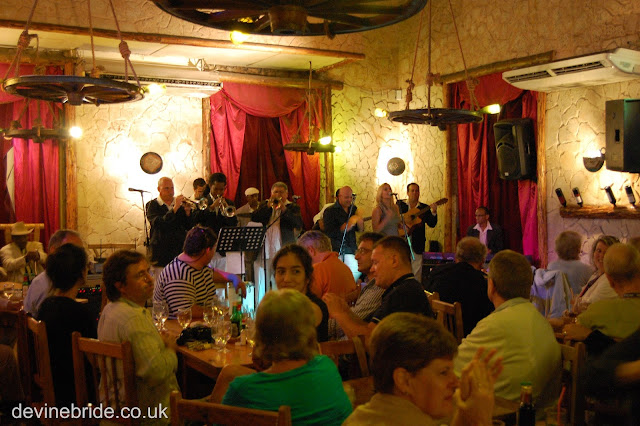 The view from the rooftop pool at our hotel in Havana: 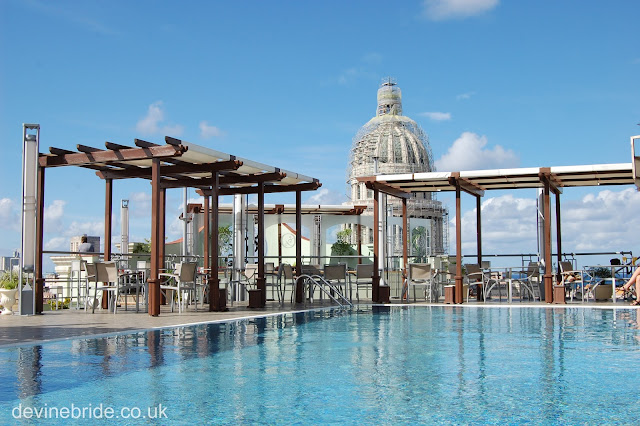 So much history, so much flavour, so much… rum!  I have never been anywhere more diverse and so rich in culture, and I know I never will again.  Go now, soak it all up, while you still can. 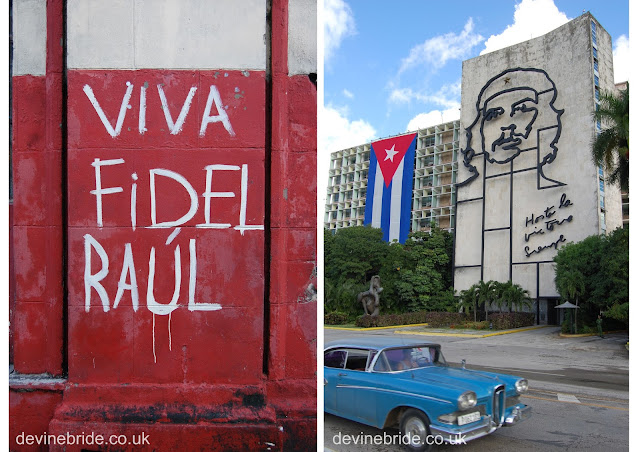 How we did it:
Varadero:  We stayed at the Melia Las Americas in Varadero and booked this through TripAdvisor.co.uk.
Trinidad:  We stayed at a Cuban guest house in Trinidad called Casa Font booked through Mycasaparticular.com.
Havana:  We stayed at The Saratoga Hotel in Havana booked through Travel Republic.
Getting there:  We flew with Virgin Atlantic from London Gatwick direct to Havana.
Internal Travel:  We picked up an ‘self-employed’ taxi at the airport to take us to and from each location, which worked out more economical and flexible for us as a couple.

Never miss a post by subscribing to my blog – if you’re viewing this on a computer, there’s a big box just below, at the bottom of the page, where you can enter your email address
and you’ll get every post delivered straight to your inbox!

And don’t forget to check out my range of services too!